Skip to content
Google Map Directions from your current location

Home » About Us » Our History » Our UU History 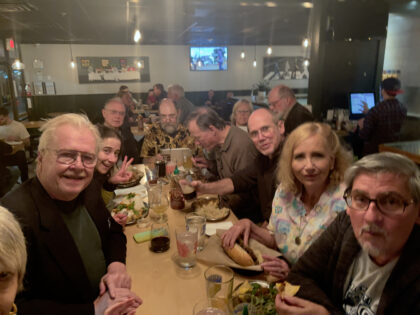 Since the merger of the two denominations in 1961, Unitarian Universalism has nurtured its Unitarian and Universalist heritages to provide a strong voice for social justice and liberal religion.

Our group of church members and friends meets using a Facebook Room every Friday at 1:00pm for knitting, crocheting, needlework, and lively conversation. You are invited to bring whatever project you are working on. Beginners are always welcome; we’ll teach you. If you’re interested in joining the group, contact Deborah Kent at dkent2012@gmail.com. You can also join their Facebook Group at https://www.facebook.com/groups/1186659734724119/

8:45 am – 10:45 am
Sunday Morning Discussion Group-Virtual Gathering
Room 114 and via ZOOM Meeting

The Adult Discussion Group meets every Sunday at 8:45am in Room 114 and via zoom. Please join them for lively and engaging conversations about spirituality, social justice, humor, and current events. No preparation is needed, and all are welcome.

Recurs weekly
10:00 am – 11:00 am
Service and Justice Ministry Team Meeting
Cockrell Hall and Via Zoom

Are you interested in helping organize public witness, advocacy service and education activities about social justice issues here at BAUUC? Our Service & Justice Ministry Team meets the first Sunday of every month at  12:15pm in Room 114 and via Zoom. Come and explore ways to get involved!

High school youth are invited to gather in YRUU room 102 at 11:00am. All other age groups, Pre-K – 8th grade, will be in the sanctuary with their families for the first part of the service. After the Story For All Ages, they will leave with their teacher to their classrooms. Parents will visit the classroom to pick up their children after the service. Childcare for our youngest UUs is available in the nursery.

A SANKOFA LIFE
The Sankofa is a Ghanaian symbol of a bird with an egg in its mouth looking back over its shoulder. African-Americans refer to it as they honor the struggles of their people while going forward in determination and hope. What does it mean to remember where we came from, both as individuals and as communities? What do we want to use from the past to make our best future? What do we want to leave behind (but still recall as lessons learned?)

Catherine Vance has been a member of BAUUC for 4 years. She is an aspirant to UU ministry and chaplaincy and is in seminary at Iliff School of Theology in Denver.

We will also be welcome special musical guest Hungrytown. Rebecca Hall and Ken Anderson–otherwise known as the folk duo Hungrytown–have earned a reputation for the quality and authenticity of their songwriting and their gorgeous vocal harmonies. Hungrytown’s music has received extensive radio airplay worldwide and has appeared on several television shows, including The Daily Show and Portlandia. Hungrytown will be providing music for the Sunday Service on February 5th and will be performing a free 15 minute concert after the service. This is a service you don’t want to miss!

Join us for coffee and light snacks in Cockrell Hall after the Sunday service. We look forward to gathering in fellowship. If you would be interested in bringing snacks, look for the signup sheet in Cockrell Hall or contact Ruth Bastian.

Following our 11:00am worship service most Sundays, a group of BAUUC members and friends goes out for a meal at anearby restaurant.  Everyoneis welcome, especially newcomers.

The Buddhist Meditation Group meets at 4:00pm on Sunday evenings in the church sanctuary. You do not need to be Buddhist to participate. For more information, please contact Doris Smith via email atdorisjs3d@yahoo.com

Our chair yoga group meets Monday and Wednesday at 10:00AM in the church sanctuary. All yoga exercises are conducted using a chair for both seated & standing positions. Class lasts 45 minutes. Please join us!

Presentation/Talk:“Abortion Rights and Options For Texans”.

Registration is required to attend the meeting. Please register at:https://ai1017_feb2023.eventbrite.com

When you register, you will also qualify to win aGift Card fromBrazos Bookstore!

Once you register, you will receive the Zoom link to join the meeting.

Meet ‘n’ Eat is the Women’s Lunch Group of the Bay Area Unitarian Universalist Church. We meet every Tuesday at area restaurants outdoors for food an fellowship. Visitors and guests are always welcome. Please wear a mask and following safety procedures. For more info, contact Carol Phillips or office@bauuc.org.

Great Decisions, the local program of the annual, national foreign policy study-discussion program will kick-off in the Sanctuary of Bay Area Unitarian Universalist Church on Tuesday, February 7 at 7:00 pm. The kickoff speaker will be Raj Mankad, Deputy Opinion Editor of the Houston Chronicle.
Mr. Mankad believes in making room at the table for voices from across the political spectrum and all our diversity. He has a PhD from the University of Houston Creative Writing Program and has edited and written for publications that specialize in economics, philosophy, literature, architecture, science and health. He previously served as the Chronicle’s op-ed editor and won the 2021 Texas APME first place in general column writing.
Attendees will have an opportunity to register for the upcoming discussion sessions that night or on Thursday, February 9 at 10:00 am, 2:00 pm or 7:00 pm.
The topics for 2023 are: Energy Geopolitics, War Crimes, China and the U. S., Economic Warfare, Politics in Latin America, Global Famine, Iran at the Crossroads and Climate Migration. Group discussions are led by trained facilitators.
Participation fees are $40.00 per person or $60.00 for a couple sharing a booklet.
For additional information, contact Robert Handy (bobhandy@comcast.net)

Join our National Alliance on Mental Illness (NAMI) free, 90-minute Bay Area Family Support Group for families and friends of those living with serious mental illness. We meet at 7:00pm on 1st and 3rd Tuesdays. The facilitators are family members who help you share your experiences in a safe and confidential virtual setting where you can benefit from others’ experiences, discover your inner strengths, and learn how to identify and use local resources. For more information, contact Don Rhorer at  drhorer99@earthlink.net or 281-627-0207. To register for this group, follow this link.

Our chair yoga group meets Monday and Wednesday at 10:00AM in the church sanctuary. All yoga exercises are conducted using a chair for both seated & standing positions. Class lasts 45 minutes. Please join us!

Join Transitional Minister J Sylan for Pub Theology at Nobi Public House located at 241 E NASA Pkwy. Come out and join us for a pint, a bite, and a bit of discussion. This is an informal group where we talk about the Big Questions in a laid-back way.

The women of BAUUC will be gathering at 10:00am on the 2nd and 4th Thursday of every month in Cockrell Hall and via Zoom to explore their spirituality and connect with others. If you’d like to be a part of this gathering, please contact Julie Blanford at julianneblanford8@gmail.com

The HIS Men’s Lunch Group meets every Thursday for lunch and conversation at local restaurants. Please see the Mid-Week Briefs and the Order of Service for Locations. Contact throop@fastmail.com   for more information